One of the big changes for the 2013 Ford F-150, aside from the addition of a new Limited model, was the availability of HID headlights on many models as either a standard or optional feature. Although high-intensity discharge lights themselves are nothing new in the automotive industry, dating back more than two decades on luxury models, the F-150 is the first mainstream application of HIDs on a full-size truck.

Why has it taken so long for the popular lighting option to make its way onto trucks? The first is cost, with early HIDs often being a four-figure option. Costs have come down over the years, but another issue that’s not as critical in passenger cars is vibration and shock resistance. Ford engineers worked with Osram Automotive Lighting, the supplier for the HID modules, to specifically design the lights to hold up to the harsher conditions pickups are likely to encounter on rough roads and off-road trails.
An added benefit to the Osram units on the F-150 is that the light and ballast are both mercury-free, highlighting Ford’s commitment to the environment. Osram claims it’s the only supplier that currently offers a mercury-free HID lighting system. 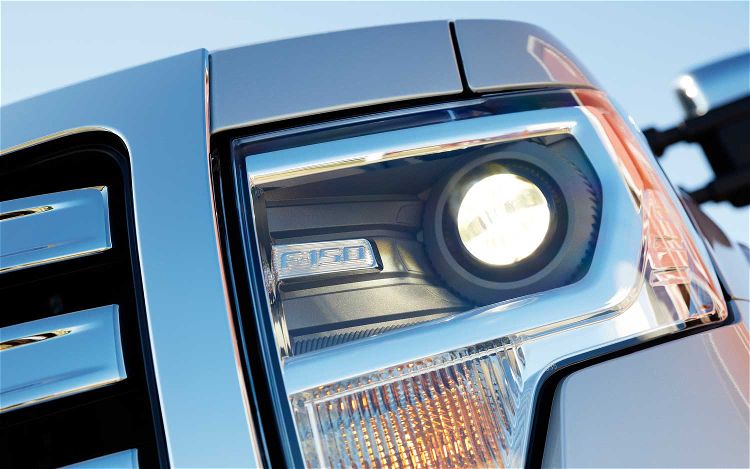 This site uses Akismet to reduce spam. Learn how your comment data is processed.

Affiliate Disclosure: headlightreviews.com employs the use of affiliate links. When you click on one of our links, we may receive a commission. This helps us continue to provide you with reviews on an ongoing basis. Please read our Privacy Policy and Terms of Use for full disclosure.

Disclaimer: We do not accept liability for any misuse of any headlight product. Some types of headlights may be restricted by law for use only in certain circumstances (eg. off-road, rural use, etc.). We encourage all to check with their local law enforcement agency before making any modifications to their vehicle’s headlight system.