“One of the reasons for the vehicles catching fire is the replacement of normal halogen headlights with HID lamps.” 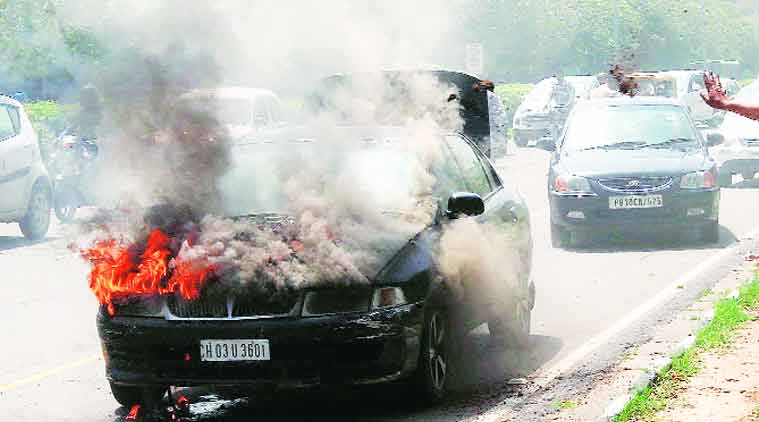 In the past two months, a total of 28 cases of cars catching fire have been reported in the city. Experts say the cars tend to catch fire either due to prolonged service requirements, defective accessories or loose connections.
One of the reasons for the vehicles catching fire is the replacement of normal halogen headlights with High Intensity Discharge (HID) lamps. It develops cracks allowing argon or nitrogen to leak out of the tube and cause a fire. Moreover, owners get high-intensity bulbs installed which have a higher wattage.
“They get these lights installed from local repair shops that are only a stopgap arrangement. This way, the earthing of the wires gets affected, which causes short circuits later. Seat belts and door latches tend to jam during such accidents. Additionally, after the first few free servicings, customers choose to go to workshops in the unorganized sector that is not likely to have skilled labor,” said Narendra Singh, TATA body shop-manager, Phase-II, Industrial Area.

He said the vehicles need to be sent for servicing on time after every 10,000 km. The wires are weak on the inside and are not taped properly. hence they can cause a spark any time, in seconds, he added.

Installation of poor quality CNG kits in cars can also cause leakage from the fuel line in the engine bay. If the cylinder is of poor quality or a valve becomes loose, this can also cause a fire. “An Electronic Control Module (ECM) controls all the accessories and wiring in a car. When an additional accessory is added to the vehicle and its wattage is not supported by the same, the ECM tends to overload, causing a short circuit in the accessory’s wire. Moreover, all the wiring is under the carpets so the entire vehicle ends up catching fire. A Chevrolet Beat caught fire near Pingalwara, Punjab, on January 22 because a double-horn was installed by the owner that caused the ECM to overload,” said Bhupinder Matharu, General Manager, Krishna automobiles. Loose connections in the fan pumps, radiator, accessories, plug, and ignition wires are one of the most common reasons for car fires since they do not have a proper grip system. The hose pipes, diesel pipes, and rubber tubes crack due to delayed servicing of the vehicle. “During summers, the engines tend to get heated up. It worsens the condition and causes sparks to ignite much faster than in winters but it often happens that lack of proper maintenance or fitment of components from roadside workshops compromise the safety of vehicles. For their own safety, car owners should have handy fire extinguishers in their vehicles to douse the flames or break the glass in case they get trapped inside,” said M L Sharma, station fire officer, Sector 17.