Update: Since we wrote this review, VVME has gone out of business.  In addition, technology has come quite a long way.  We now recommend the HIKARI LED KIT as our aftermarket headlight of choice!

VVME headlights are an inexpensive alternative to the costly HID Conversion Kit you can find all over the internet.  In fact, they are so inexpensive that we were skeptical when we first ordered the HID kit.  How did the kit perform?

The install took roughly an hour, and the only tools that were needed were a screwdriver, crescent wrench, and some zip ties.  The most difficult part of the installation was actually finding a place to attach the ballasts.  Since the Nissan Pathfinder, we put them in was not designed for HID headlights, they did not set aside a place to install ballasts.  After a little bit of creativity, we decided to attach the ballasts directly behind the grille with zip ties.  A year later the zip ties have held up quite well.  The ballasts and bulbs are still in great condition, but the cables connecting the ballasts to the headlights and car battery are wearing out. 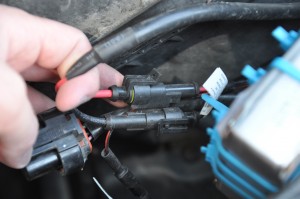 We used Zip Ties to hold the ballast in place (above), as well as to secure the cable running between the battery and ballast, across the front of the hood above the radiator (below). 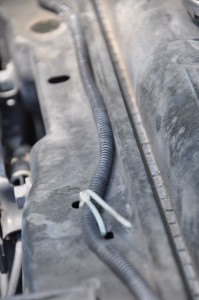 We were forced to be a little creative when running the cables from one headlight to the other.  Since the Pathfinder wasn’t made for HID’s, we improvised and found a spot for the cables across the top of the radiator housing.  We managed to find a couple of holes that we put the zip ties through to secure the cable and keep it in place.

As we mentioned, the most difficult part of the HID installation was the mounting of the ballasts.  The ballasts ended up being a little larger than you might think.  We went with the regular HID ballasts as opposed to the slim ballasts, as they offered better performance and brighter lights.  Here’s how they size up next to a dollar bill: 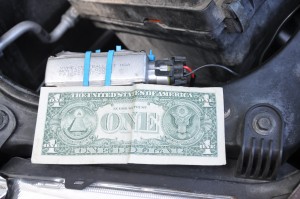 As far as the headlights are concerned, we were fairly pleased.  They are definitely brighter than the stock halogen bulbs that came in our vehicle.  While the item description claimed to be pure white, the 6000k bulbs we installed actually burn with a tinge of purple in them.   We’ve been driving with them for over a year and still haven’t had anyone flash their high beams at us.  This is partially due to the design of the reflector housing on the 2008 Pathfinder.  It was engineered to cut the light off horizontally, similar to projector headlights.  Thus, even with the HID bulbs in a reflector housing, we haven’t had any issues.

As you can see, the bulbs are almost identical in color to the headlights found in the 2011 BMW vehicles.  It’s a very clean, crisp looking light.  We chose the 6000k because, after a lot of research, they seemed to be the brightest while still having a little color to them.  We feel that if we would have gone with the 8000k they would have been more blue, while the 4300k would have been borderline yellow (the same color as halogen bulbs).  We have noticed, however, that the Kensun 6000K bulbs are actually a more pure white light.

Here’s a clear shot that demonstrates the true color of the VVME 6000k headlights: 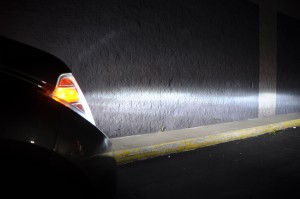 We decided to go with the BI-XENON HID kit, allowing for both low-beam and high-beam lighting.  We have never needed the high beam, as the low-beam is bright enough, even on dark nights.

UPDATE November 28, 2011:  After about a year of good use out of the VVME HID lights, we took our Nissan Pathfinder in for some service at the local dealership.  We replaced the car battery as part of the service, and as a result one of the bulbs burned out.  We tried checking all of the cables and connections and noticed that one of the ground cables was not secured properly to the frame of the vehicle, as the mechanic had agitated the wires a little.  So, we reconnected the ground cable and the lights worked great — for about a day or so when the bulb burned out again and would not come back on.  So, as a result, we’ve purchased a set of Kensun bulbs and have provided a review of those here.

Affiliate Disclosure: headlightreviews.com employs the use of affiliate links. When you click on one of our links, we may receive a commission. This helps us continue to provide you with reviews on an ongoing basis. Please read our Privacy Policy and Terms of Use for full disclosure.

Disclaimer: We do not accept liability for any misuse of any headlight product. Some types of headlights may be restricted by law for use only in certain circumstances (eg. off-road, rural use, etc.). We encourage all to check with their local law enforcement agency before making any modifications to their vehicle’s headlight system.